Expansion of Yoga: Enormous growth in last one year

"Yoga is an invaluable gift of India's ancient tradition. This tradition is 5000 years old. It embodies unity of mind and body; thought and action; restraint and fulfilment; harmony between man and nature; a holistic approach to health and wellbeing. It is not about exercise but to discover the sense of oneness with yourself, the world and the nature. By changing our lifestyle and creating consciousness, it can help in wellbeing . Let us work towards adopting an International Yoga Day."

Yes, it was ours initiation that commenced the International Day of Yoga in the entire world. The world is celebrating 2nd anniversary of International Yoga Day on 21st June. In the last 1 year, this industry has expanded at unbelievable rates. There has been enormous growth in the demand clothes, DVDs, trainings and accessories related to yoga, not only in India, but across the world.

Some mind-blowing facts about yoga

According to the government document issued on Make in India, market of products related to yoga and Ayurveda has reached to the value of 120 arab rupees in the entire country. In the last one year, yoga industry has grown to 50% while trainers up to 40%. There has been an increment of 35% in the yoga doers also. A market of Ayurveda resort, Holiday camps, corporate trainings is getting prepared. The market of clothes worn at the time of yoga has itself reached above 1000 crore rupees. This has been the reason why companies like Prayog, Bhu-satva, Forever Yoga, Urban Yoga etc. have entered the market of clothes. This is going to be doubled till next year. The business of products and training of yoga is growing rapidly in comparison to any other business. Demand  related to shoes, CD, DVD, band, accessories, studios etc. has risen very rapidly. E-commerce companies, by virtue of special offers, have brought in special yoga theme stores. 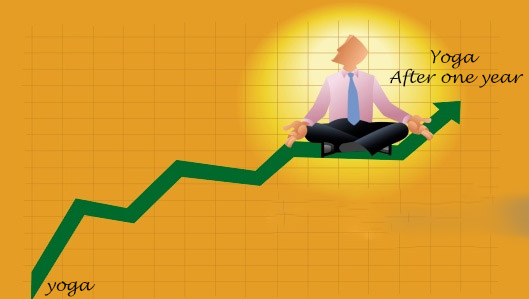 In the last one year, yoga doers have increased in countries like America, China and Europe. Indian trainers in large numbers are going to these countries and people from these countries are coming to India to learn yoga. Government is also planning to provide special visas to the people coming India for special yoga course.

Government want to capitalise the situation of increment of yoga-doers for its dream campaign Make in India. Indian Government has launched Khadi kit. Even this has moulded the career of many students. There has been an increase of almost 100% in the students adopting this as a career. This is the reason why more than 50 universities – colleges have initiated the courses of BA, MA etc. in yoga and fitness field. Foreign students have also showed interest in these courses. Various universities have been advised by The Health Ministry of India to establish yoga department. Government of India has tied-up with Quality of India for providing certification course for instructors. He shall be a certified yoga trainer. He shall not be a mere theoretical person, he shall have the entire practical knowledge. Steps have also been taken to commence yoga in 14 lacs schools of the country.

On the world-level, the value of business in this field has reached up to Rs. 5.37 lac crores rupees. In America itself, people pay around 69 thousand crores rupees as expenses on books, training, costumes and accessories related to yoga. There 3.5 crore people regularly do yoga.

There has been an increment in the demand of mats used for yoga to the tune of 80% and in the dresses to the tune of 40% to 50%. Not only companies but even yoga gurus are also earning high profits. Patanjali brand of Baba Ramdev has reached above Rs. 2 thousand crore and he is forecasting the figures of this year as 5 thousand crores. Central Television of China has made 52 DVDs on the ‘Ramdev of China’ Mohan Bhandari and these DVDs are selling in the entire world. A former business consultant Bhavini Kalan is now purely into yoga. She has been earning quite good amount from training programmes of yoga conducted by her in America, Europe, Africa and India.

Reasons why companies are adopting yoga for employees

This is really great news for India as yoga has been an invaluable asset of Indian culture and history. Hon’ble Prime Minister has done very well to ensure that yoga remains a centre of attraction as far as fitness is concerned. There is a lot of opportunities for India and Indians in this field.