Now breaking the traffic rules on intersection can get you in some really serious trouble. In fact the Jaipur Development Authority has decided to outsource the task of identifying the violators and taking some strict action against them to some private companies. Using the sophisticated technology violation detection systems would be installed on all the four signal poles of the intersection. Thanks to the advanced technology f the machines the violators will get the automated challans. The automated system will be started from this month with Rambagh Intersection.

Rambagh intersection is one of the busiest intersections of Jaipur. As per the Traffic Control Room, during rush hours as many as 10 to 12,000 vehicles pass through Rambagh intersection. Similarly, 22 Godam and Ajmer Road also experience heavy traffic. The heavy traffic during rush hours results in violations. The new technique is expected to bring some major positive changes in the situation.
The technique is already a hit
The automated violation detection system has already seen a major success in the metro cities like Delhi, Pune and Bengaluru.

The automated eyes will be on a lookout for:

• Two-wheeler riders without helmet
• Riders and drivers using mobile phones
• Vehicles involved in hit and run cases
How the system will work
The system will be connected with Traffic Police's ATCS (Area Traffic Control Room). It will work through sensor that will help in identifying the violators. It will automatically take the photograph of violator vehicle and instantly send it to the server.
The server will trace the name and address of the owner using number plate details. The challan notice will be generated automatically. Police only needs to send this challan to the owner's address. Thus it will relive the major chunk of police's task.

What is the Present System?
In the present system the violators are monitored by cameras and the process involves several staff personnel’s of traffic police. The violators are monitored through video camera. One police staff stores the footages of the same while the other one sifts through these footages to single out the photos of violators. These photos are the sent to videography section. Depending upon the footage as many as 4 lady staff dispatches challans and send them to higher departments. Combining the total strength o police staff, technical staff and staff on duty as many as 15 employees are required to be involved in his whole process. 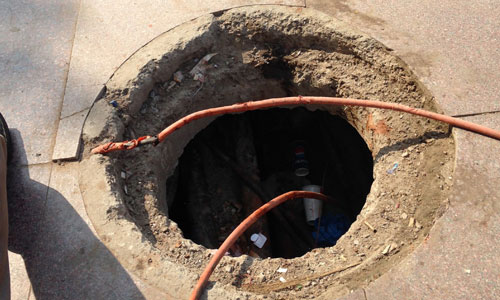